No one can build you the bridge on which you, and only you, must cross the river of life 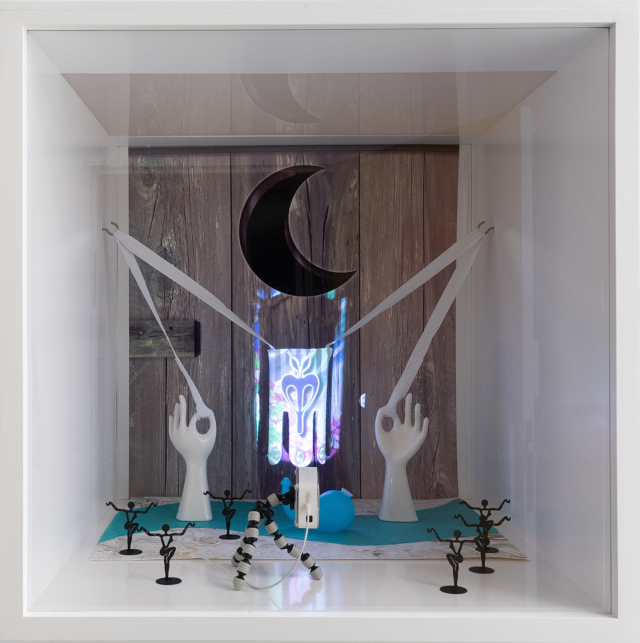 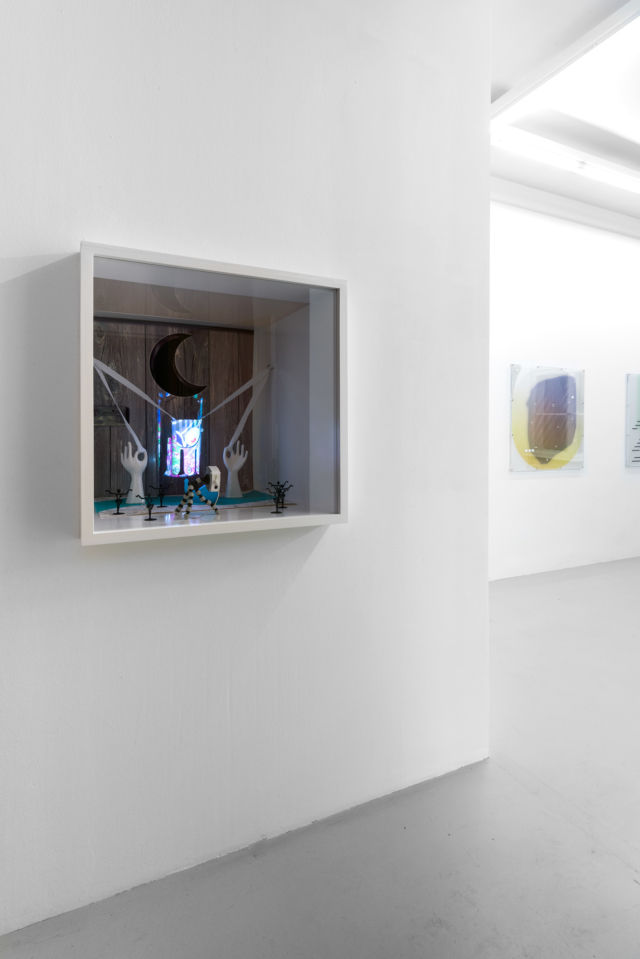 A new site specific installation for Der Würfel by Shana Moulton brings together a varied selection of symbolic objects and a single video.

Central to the installation is a form of a uterus created from a ‘sock aid’ upon which the video is projected, and two ceramic hands which hold it in suspension. The sock aid can also be seen as a bridge, under which a Neti Pot sits on a streak of blue paper, cut to represent a curve in a river.

The video itself includes elements from an educational film from 1965 about the process of a Kangaroo gestation – something that stirred Moulton as a child and had a lasting effect on her memory.

Shana Moulton’s works of video and performance art are humorous examinations of the interplay between consumerism, commercialized New Age philosophies and fragmented reminiscences of other artistic styles, such as Land Art, and individual artists, including Mondrian and Georgia O’Keeffe. Her videos, into which she cuts psychedelic sequences, and which call to mind the video aesthetics of the late 1970s and 1980s, were conceived as a series entitled ‘Whispering Pines’ (2002–). The fictional character Cynthia – an alter ego played by the artist – is a bored, hypochondriac housewife who, as an antithesis to the fun-loving and ravenously adventurous female characterization found in the work of Swiss artist Pipilotti Rist, is on an ongoing quest for redemption.

By placing her protagonist in a domestic setting, and in her choice of the televisual format, Moulton draws on narrative concepts developed in soap operas and so transfers a popular genre into the context of art. The moments that illustrate the world of Cynthia’s imagination, which frequently slides into a psychedelic register, are often also marked by a ‘migration of form(s)’ – characters and motifs drawn from the canon of an already recognized history of art and from alternative subcultures.

Born in 1976 in Fresno, Shana Moulton lives and works in New York and California. She received a BA from the University of California, Berkeley (1999), MFA from Carnegie Mellon University, Pittsburgh (2004), and attended the Skowhagen School of Painting and Sculpture, Showhagen (2004) and De Ateliers Amsterdam (2004–6). Moulton has had solo exhibitions at: Tokyo de Paris, Paris; Kunsthaus Glarus; Museum of Fine Arts, St. Petersburg; MOCA Cleveland (all 2016) and Yerba Buena Center for the Arts, San Francisco (2015) among many others.